A Brief History of Our Company from 1976 to Present

In 1981, Ray decided it was time for more space and purchased the current building on 208 Main Street. Deanna took over the Sears Catalogue Order office in 1983 and it remained until 1992. Sears reopened our Catalogue Office in October of 1999 and was later closed for good in February of 2007.

Michele Zaporozen – daughter of Ray & Deanna Guidry:
During Michele’s years in high school, she had worked part-time in the business. After a couple of years in university, she moved back to Allan (1984) and began working part-time. Then, in 1986, she started full-time and obtained her Insurance Brokers License in 1989.

1990 saw the incorporation of the company and the sale of the Insurance Agency and Allan Gift & Novelty to Michele. Ray and Deanna had officially semi-retired. Ray continued his bookkeeping and income tax preparation business.

Samantha was born on October 19, 1996 to Michele and Howard and grew up as the welcome girl and entertainment for waiting customers! In 2014, Samantha graduated from Allan Composite High School and enrolled in the University of Saskatchewan.  On October 1, 2017 Samantha left university and returned from the city to work at Allan Agencies.

In 2001, Howard Zaporozen became an equal partner in the business.

2017 saw the close of Allan Gift and Novelty after 40 years.

Employees Over The Years: 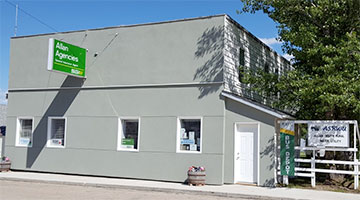